I visited Tallulah Gorge with some friends about five years ago. I have thought recently about returning, and yesterday I did it. Wow, what a day.

I live about an hour away from Tallulah Gorge. With the fall colors on full display, the drive was nice. The trees showed a full range of colors – green, orange, yellow, red, and brown. The mist hanging over the mountain tops and the winding roads reminded me of driving in the Smoky Mountains. For a while my radio was playing, but then I turned it off so that could focus on the view.

Tallulah Gorge is in Tallulah Falls, GA near Toccoa. The dam (completed in 1913) was built to provide electricity for Atlanta. It is 129 feet high and 429 feet long.

The Interpretive Center (visitor’s center) contains a small museum featuring models of the local animal life, some aquariums with snakes and fish, and a small theater where they show a 15 minute film about the gorge. 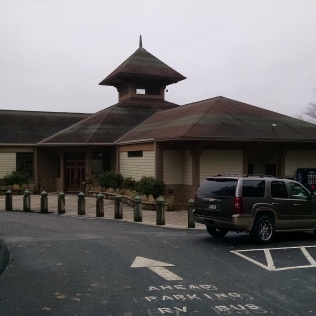 After exploring the Interpretive Center I began the hike. I knew from my last visit that it would be strenuous.

My first stop was at Overlook 1A. From here you can look down on the suspension bridge. 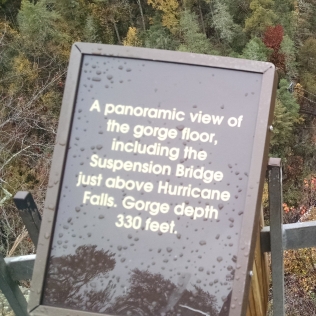 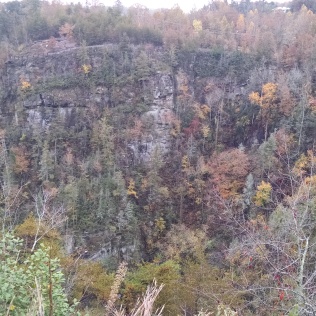 A short distance further is the north Wallenda tower. In 1970 Karl Wallenda walked a tightrope across the 700 ft gorge, stopping to do two headstands along the way. This tower held one end of the tightrope. The tower now lies on its side and has been there so long that trees are now growing between the beams. 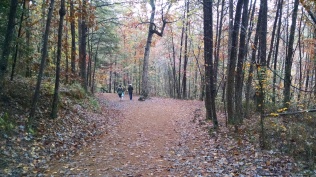 Just beyond the tower there is another view down into the gorge.

I then went to Inspiration Point. I could see the Interpretive Center in the distance. 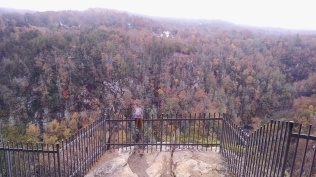 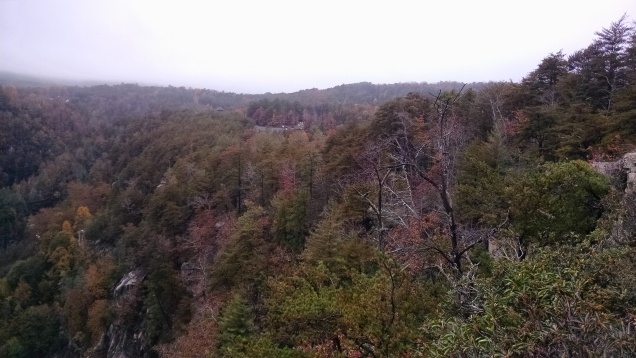 I then backtracked a short distance so that I could visit Overlooks 2 and 3. 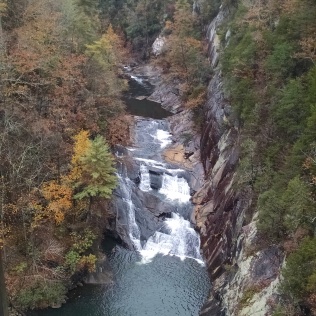 After this I began the walk down toward the suspension bridge. At the beginning of this section there is a sign warning hikers that this is a strenuous trail and that people with health problems should not attempt it. On the way down I could feel the strain on my knees. I have had problems with my knees for many years, and so I knew the climb back up would be even more difficult. 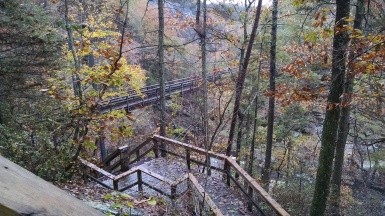 The suspension bridge offered a nice view of the river. I was nervous when it shook on my way across. I spoke with one woman who turned back because she was afraid to cross it. Maybe I should be glad that the old man from scene 24 did not ask me for the airspeed velocity of an unladen swallow.

I then had a choice to go to the bottom of the gorge to see Hurricane Falls or climb to the South Rim trail. I took the fork to the left to Hurricane Falls. 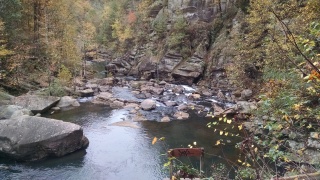 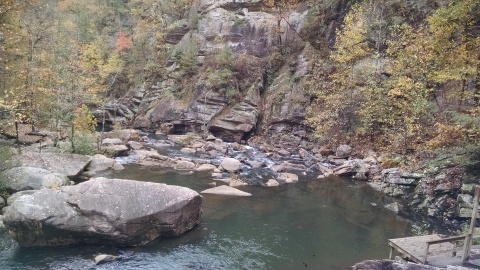 The hike back up the gorge was rough. Look at that stairway. I stopped several times to rest my knees.

After a strenuous hike I reached the fork where I could hike to the South Rim trail. I decided to skip that part because I was already tired, and a woman I met on the trail heard from other hikers that it was even more difficult than the hike from Hurricane Falls. Maybe I will come back and write another post on that trail.

I stopped to rest several times during the rest of the hike back to the top of the gorge. I then followed the North Rim trail toward the dam. That trail was short and easy. 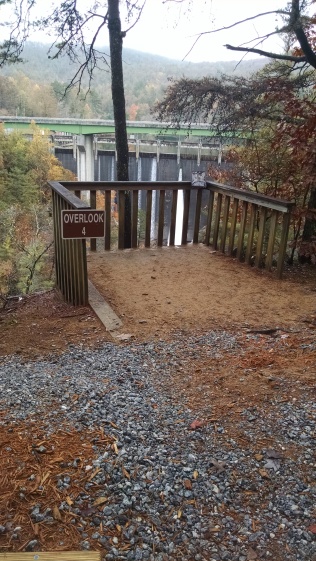 When I returned to the Interpretive Center I watched the film about Tallulah Gorge and browsed at the gift shop. I did not buy anything.

I read somewhere that writers do not wait for inspiration; they chase inspiration. I took this trip with the hope that I could write about it. I carried my writing notebook so that I could take notes during the hike.

I had originally planned to stop and eat somewhere on the way home, but instead I went home to take a shower. I then went to Bar H Barbeque in Royston. On the way home after dinner I listened to While I’m Waiting in my Google Play collection. I reflected on my past struggles with never finding a job in my field. I do not know where my life will lead, but for now I will strive to be faithful in writing each day, improving my ability, and trusting God to take it where He wants.

A good way to end an exhausting day. I always enjoy my one-on-one time with Arwen. She is a good buddy.

I am interested in Christian theology and church history. I also enjoy science fiction, fantasy, and stories which wrestle with deep questions.
View all posts by henrywm →
This entry was posted in Travel and tagged Travel, Writing. Bookmark the permalink.