A Crime Story from My Childhood 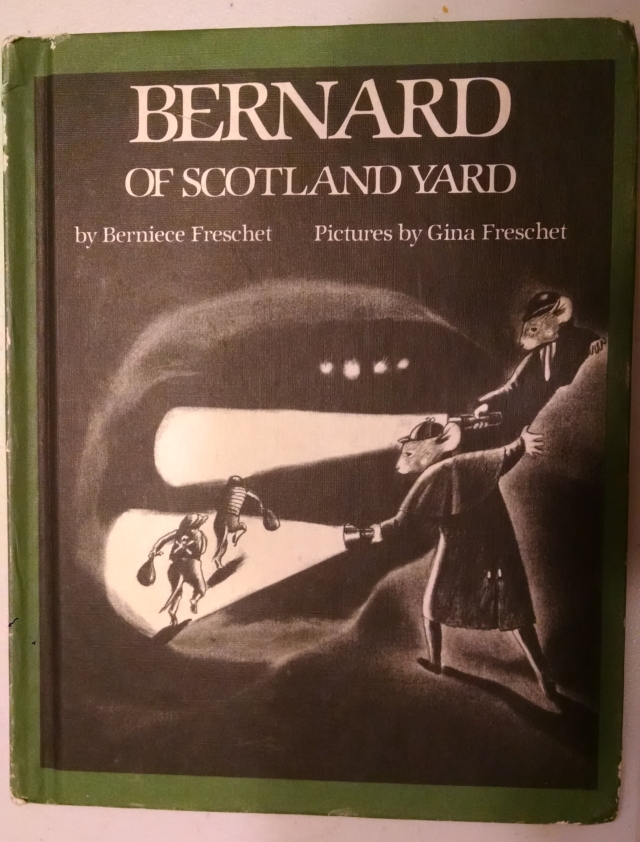 by Bernice Freshet and illustrated by Gina Freshet. I received it in a monthly mail order book club. I do not have my childhood copy, but I bought a used copy online. I do not remember most of the books I received through the book club, but a few still stand out in my mind. This is one of them. Another is The Ghost of Windy Hill

The characters in this story are mice and moles, but they do not live in the wild. Instead, they wear American and English-style human style clothes, eat at dinner tables, etc. They also live in human-like societies. There is one strange twist, however, in the way that the illustrator portrays how the characters fit into the world around them. There are no humans in this story. There are only mice and moles. but they live in buildings which are the size one would expect for buildings made for humans. They also do not live behind the walls or under the floor boards hiding from humans. They live out in the open. Do humans simply accept them or not notice them, or do the animals choose to live in immense buildings in a world with no humans? The book leaves this question unanswered. It is not important to the plot, but it is an interesting question when viewing the illustrations.

Bernard lives with his parents, brothers, and sisters in Boston (all mice). While his aunt Hilly is visiting from England she tells them that her son Foster is an inspector with Scotland Yard and that he is working on a difficult case involving some jewel thieves who only steal diamonds of a certain size.

Bernard decides to go to England and help Foster. He gathers some items from around his house (balloons, a candle, strawberry basket, bottle caps, string, a hair net, and buttons) to build a hot air balloon. He then rides the balloon across the Atlantic ocean to London.

He meets Foster at Scotland Yard and offers to help. Foster makes him a temporary inspector and briefs him on the case. He is certain that the Mole Gang is responsible, but he cannot find them because they live in drain pipes under London. He does have a tip that they will be at Lady Thistlethwaite’s ball that night where women will wear their best jewelry. Foster and Bernard plan to mingle with the crowd with hopes of catching the moles.

That night the moles rob the ball. No one sees them enter, but women suddenly report that their jewels have been stolen. Someone dressed as a pirate bumps into Bernard and then quickly leaves with three other pirates. Bernard suspects they are members of the gang and follows them into the sewers. He then discovers why the gang is stealing diamonds. They mount them on the sewer ceiling to catch light from above and illuminate the tunnels.

Bernard finds the moles’ hideout and overhears their leader Rotter propose a plan to steal the crown jewels that night, but Bernard cannot hear the details. He returns to Foster to inform him. They gather some police and wait in hiding in the Tower of London. Shortly after Big Ben rings for midnight Bernard hears scratching and then sees the moles appear from a tunnel in the floor. As they are filling their sacks Foster blows his whistle. Police appear and a great commotion begins. Bernard grabs a mole named Bobo. Foster grabs Rotter, but Rotter hits him on the head and escapes. The rest of the moles are arrested, and the jewels are saved.

The queen (also a mouse) invites Foster and Bernard to the palace the next day. She knights them and gives them medals. During the celebration a young woman, fascinated with his bravery, approaches Bernard. She tells him to call her Maid Marian. The story ends with her holding his arm and expressing her admiration.

This story has elements of adventure and secrecy which would be fun for young readers. Despite the commotion iin the Tower of London, it is not a violent story. The illustrations are also well drawn.

I enjoy revisiting favorite books from my childhood that I have not read for decades. They might not have the literary refinement of a best-selling novel, but it is nonetheless nostalgic to reflect on stories that grabbed my attention in a special way. Reading these stories again also brings back memories associated with the stories, such as conversations with friends who enjoyed the same books. One of my childhood friends who lived on my street in Augusta, GA moved to a town near Boston when I was in first or second grade. During one of his visits in Augusta I showed him this book. He was interested when he learned that Bernard lived in Boston.

What are some of your childhood favorites? Did you read any of the books I have reviewed when you were a child? If so, did you like them?

I am interested in Christian theology and church history. I also enjoy science fiction, fantasy, and stories which wrestle with deep questions.
View all posts by henrywm →
This entry was posted in Reading and tagged Reading. Bookmark the permalink.