Time for Reflection (and Clearing My Head) at Tallulah Gorge

Last Friday I went back to Tallulah Gorge. The last time I hiked to the bottom and then back up. I was so sore and tired that it took me two days to recover. Today I did not want a super strenuous hike, and so I did not go to the bottom. Instead I needed to take a break from my usual routine to think about some writing ideas and to clear my head. 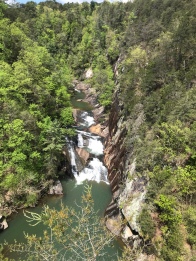 A short distance from the Interpretive Center (visitor’s center) I took the right fork to the trail along the North Rim Trail. I walked down the steep series of staircases to the suspension bridge stretching over the Tallulah River. Whenever I cross this bridge I think about the Bridge of Death and the Gorge of Eternal Peril in Monty Python and the Holy Grail.

On the other side of the bridge I came to a fork. The left fork led to the bottom of Hurricane Falls, which is where I went last time. The right fork led to the South Rim Trail. Both are difficult hikes, which was not my purpose this time. I instead sat on a bench near the fork to relax and think.

I leaned back against the railing and closed my eyes. I felt the cool air and mild breeze and listened to the water falling over the waterfall under the bridge. I have written previously on how I was unable to find a job in my chosen field (Christian ministry and research). While sitting on this bench I thought about how not working in my field has been difficult. Maybe someday I can do work in ministry or research, but for now I to make plans elsewhere. Making this decision has been difficult, but I need to consider my current financial needs.

I also thought about writing. I thought briefly about a story idea I had almost a year ago. So far I only have the opening paragraphs and some basic concepts. I want to write some fiction, but something in me, which feels like a blockage or a dry well, prevents me from developing my ideas. While on this hike I carried two small notebooks in my back pocket: my general writing notebook (in which I wrote notes for this post) and my fiction notebook. The fiction notebook is nearly filled with notes and writing fragments, and so why is there a blockage? On the one hand, I can analyze and write about ideas (my education is in theology), but I struggle with writing fiction. On the other hand, fiction is one of the most effective vehicles with which to explore ideas. Consider, for example, such movies as Saving Private Ryan (the horrors and ethics of war) and Minority Report (the relationship between foreknowledge and free will). I could use fiction to present ideas and still use my education if I could clear this block in my head.

I then walked back across the suspension bridge. As I reached the other side the sound of Gene Wilder in Willy Wonka and the Chocolate Factorysinging, “Come with me, and you’ll be in a world of pure imagination” ran through my head. That was strange. Interesting timing, however.

During the difficult climb up the stairs I was glad that I did not go to the bottom of the gorge. At the top I sat on a bench near the ledge overlooking the L’Eau d’Or Falls and Hawthorne pool. I felt my heart pumping hard from the climb and then felt it slow down.

I walked back to the fork near the Interpretive Center and continued down the left fork toward the Wallenda tower. Along the way I passed this tree in the middle of the trail. 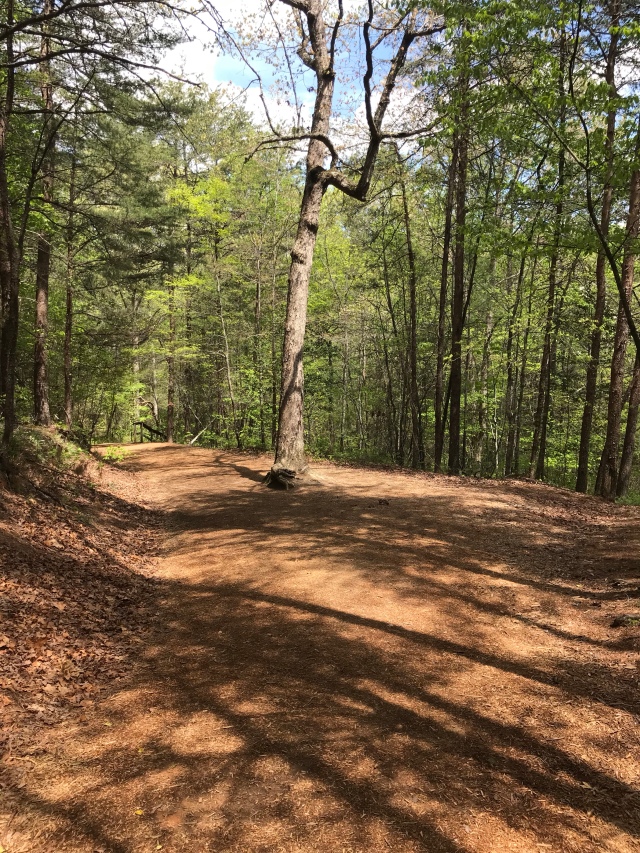 This tree intrigued me the last time I hiked here. What an odd place for a tree – in the middle of a trail. This time I stopped, looked at it for a while, and considered a “what if” scenario. I thought of the scene in Stranger Things when Joyce Byers crawls through a tree and enters the Upside Down. What if I could do that with this tree? A tree in the middle of a trail seemed to be the appropriate place for such a portal (but preferably somewhere less dangerous than the Upside Down).

At the North Wallenda tower, I spoke briefly with a couple who had a Rat Terrier dog. The wife said he was a Katrina rescue, a dog from Louisiana who was displaced by Hurricane Katrina. No doubt that was a frightening experience for him, but he now has a family who loves him.

I then walked the trail to Inspiration Point. On the way I sat on a large boulder to think for a while. On the other side of the trail was a partially uprooted tree. 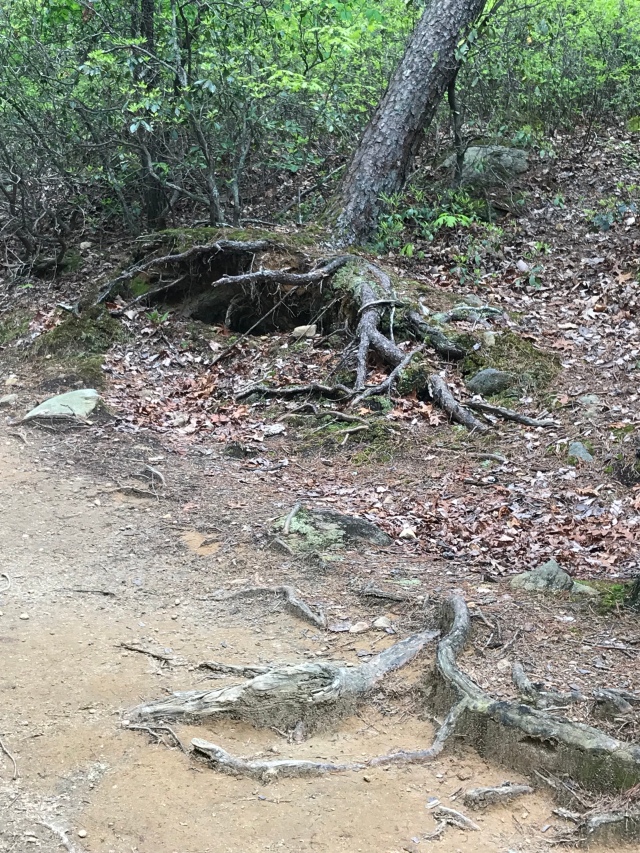 Building on my what-if scenario regarding the tree in the trail, I imagined crawling under this tree to an underground realm like in the movies Legend and Pan’s Labyrinth. (I do not believe that such worlds exist, but they make fun stories. I have always liked stories with fantasy themes.)

I walked back to my car and drove to Hartwell so that I could get my groceries. I stopped for dinner on the way and began writing the rough draft for this post. When I arrived at home, my cat was waiting for me at the top of the steps as usual. I did not get much business done today, and I did not do much packing for my upcoming move, but I think it was nonetheless a fruitful day.

I am interested in Christian theology and church history. I also enjoy science fiction, fantasy, and stories which wrestle with deep questions.
View all posts by henrywm →
This entry was posted in Writing and tagged Fiction, Travel, Writing. Bookmark the permalink.